creaky eccentric bb, can i fix it for cheap?

i have an iro model 19, eccentric bb with 2 fat set screws on the bottom of the shell. all was fine and dandy for the first few rides then it started slipping, so i tightened it, slipped more, the cycle continues until i have an egg shaped bb shell that creaks every time i get out of the saddle.

my first thought was to shim it as tightly as i could, i made a professional purpose built shim out of an adult beverage can and put it in there. the creaking ceased until approximately 2 and a half minutes into my ride. pretty pissed at this bike right now. im thinking about putting some more shim i there with a touch of grease to help keep the whole thing quiet but after a quick search online just about every other eccentric bb design similar to mine will forever make some kind of noise. unless i spend ~$100 on a new eccentric that is built using science and math.

i don’t want to spend $100 on a fancy eccentric, what are some cheap solutions? i was thinking about trying to find some thin nylon or delrin sheet and making the shim out of that in hopes that it will quiet the noise caused by movement of the eccentric that without a doubt will continue until the end of time

its either that or im selling the frame and getting something with a traditional bottom bracket. as much as i hate to say this, performance has an access aluminum 29er hardtail frame for $119… add a chain tensioner and seat post shim and im ready to go.

when i had a tandem with an eccentric, my shop told me to set it up so that the BB was at 6-o’clock (or close) so it had nowhere to slip. i’m sure you ride the IRO far harder than we did on that bike, but… might be helpful.

eccentric needs to be at 3 or 9 to get my chain tensioned right with the gearing that im running.

maybe i could get it lower with a half-link…? did it make less noise when you moved it to 6 o’clock?

i never had any problems with it, but that was with very infrequent, low-effort riding.

i’ll give the anti-seize a try. i did clean it out each time but only put a light amount of grease on it.

the eccentric fits into a bb shell that looks pretty much like an american/bmx bb shell but with set screws on the bottom. the shell is about 2mm larger than the eccentric. i used the cans to shim them closer to the right size. there is less movement in there now, but it still makes noise. if i were to wrap teflon tape around the junction it might work for a short period of time but the movement will eventually wear through the teflon tape and i would be right back where i started.

of course, this is just a guess based on experience with other mechanical devices and using teflon tape on things other than fixed threaded surfaces… so i may be wrong. have you used teflon tape on a junction like this before? also, i would think it might cause the eccentric to slip a little.

however, i have tons of the stuff because every time i need a little i can never find the roll that i already have and end up buying a complete new one but i have just found all 3 or 4 rolls of the stuff.

I’ve done it. It worked…
http://docs.google.com/viewer?a=v&q=cache:pD0Z3jf5zMgJ:www.ninerbikes.com/downloadfly.aspx%3Fdownload%3Ddownloads/nin_EBB_install.pdf+eccentric+bottom+bracket+teflon+tape&hl=en&gl=us&pid=bl&srcid=ADGEESi8kyZ_7W3DYVaQ1wTx5gDPIDfApipgS0JJAaFyPQzv2lDMKBbJGK8ouJ-XBQGyOASTDQnAXb6oT0n6n99WRlc0BWnU_wKiYjlFr_N_mTJrNp05HZQClsaDVrgo1gejUvsquB9G&sig=AHIEtbRBn_KUlehnQm-Cl7flH9fs8AeJBg

i see how that works on your design, but mine is like this: 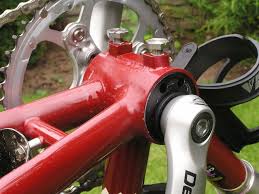 so im not sure if it will work, still worth a try though.

it is a bad design.

gonna sell as soon as i can and buy regular frame

don’t take this the wrong way, but this thread makes me SO glad I didn’t get one of those frames, and held out for the Monocog Flight 29.

(I emailed IRO about the eccentric BB when it was on sale and they said they had had absolutely no complaints about creaking.)

Never doubt Ray. He’s a machinist and does hill climbs on a brakeless 1:1 Pista and doesn’t afraid of anything.

bringing back from the dead. instead of teflon tape or anti seize,would carbon paste not work?