first things first:
No, I did not use the search function and if there is a result direct me to it. Now,

-side note, I put this rear wheel (pauls) on my other bike with an Andel/Alien cranket/bb which according to BensCycle is 44mm and the drivetrain was fit to stalk prey at niget, silent. Then, I put it on my current setup and it sounds terrible. I have done my research and have found that the 111bb is supposed to give me enough to line the chain line up, Some guys over at londonfixed are using the 111bb with sg75/and goldtecs (45mm) with no issue. So, who has some answers?

Some things I was thinking about:
PhilWood ISO 110.5 bb (adjustable bb) but kinda expensive
Miche pista bb 110. adjustable but I’ve heard it slips ALL the time.

Please weigh in and offer some suggestions to silence this thing.

wouldn’t a 113 iso bb give you a perfect chainline (because each millimeter added to your bb adds half a mm to your chainline)? i mean, 111 should be fine, but.

also: are you mixing new and old chain, chainring, and cog?

What’s the age like on the chain/cog/ring? Sometimes a new cog or ring on an old chain will make death noises.

thanks all. All parts were brand new. I thought it was a breaking in thing but it was such a god awful sound, i felt something was wrong,

anybody know of a good 113 iso taper bb, not too spendy

Probably something else is wrong. Or, get a shop to measure your chainline. Unfortunately, the Park CLG-2 chainline gauge has been discontinued. Shops might still have it or something similar. Or you could think of a way to measure it.

I’ve found on numerous bikes that eyeballing my chainline, which probably get you to about <5mm tolerance, has been good enough, but YMMV. Does it look perfectly straight? If yes, I’d say chainline’s not causing the noise.

edit: Installing your cog the other way would take mm’s off your chainline at the hub, which would have the same effect as putting on mm’s at the cranks, but could be too much. If I remember right, Surlys are quite much “off-center”.

I actually have a eai cog on order. I’m hopping that should do the trick. If not, I would be getting a 113mm bb but where the hell are they. I can;t seem to find any on google? Where are you…?

well, no luck looking for a 113 iso bb, so I think I will go with the Miche but does anyone know to what degree it is adjustable?

I mean I am off in my chainline by prolly 1-2mm so will this address it? Its stock 110 so another 3mm out should do it OR should I get the 115 miche bb and adjust it the other way (towards the bb shell)

i have this??? 113 mm thats all i read about what u need, etc. its lightly used, minimal miles, for sure. its for sale 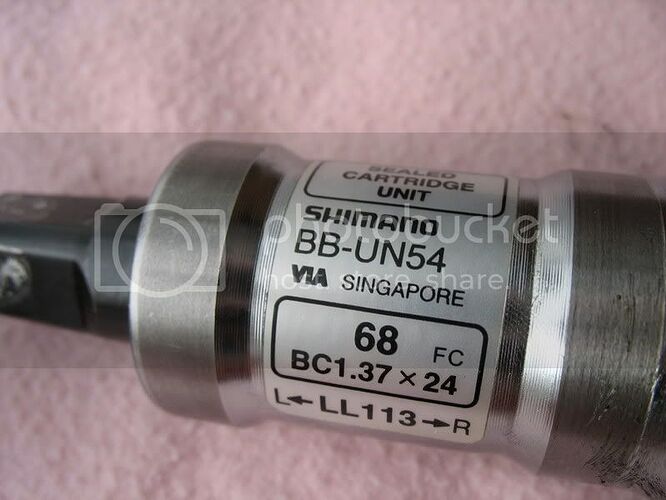 Both chains and same noise?

I have a last ditch effort to remedy the problem before I buy a new bb. I forgot that I have bb/cog spacers. Hopefully I can put them in today and give me a reason to use my new bike stand. I anticipate that it will work but am a bit cautious about it moving to far and having the non-drives side make contact w/ the chain stay, wisj me luck. Pics to come. First I need to get a new cog, FUCK…

I sold the surly i had becuase I could not deal with the sound and am waiting on a eai to come in.
soon…

I know this is probably approaching the insultingly obvious, but are you sure your chain tension is ok?

My chainline on the new bike is noiser than on the old one, its alittle annoying.

chain tension is good. I tried tight and not -tight with the same result. Maybe somebody with paul hubs can come forward and share what their drivetrain is like/consists of. thanks for the advice.

f*ckin hubs SUCK. I put the spacers on and got what I though was a pretty good non-binding sound and straight chainline. Then I put the non-drive side cup on and tightened it all down and it would not spin. The spacers fixed the spacing issue but pulled the bb too far away from the non-drive side crank bolt. So when I tighteded it down it pulled the crank arm up against the bb creating the bind.

possible next steps: need your opinion.

Miche BB adjustable
Andel/Alien bb/cranks for to give me that 144
Sell this paul hub and get a Phil, Profile or something/anything that will not give me any problems.

profile also has 44mm chainline, so.