This is a self-loathing thread. A confessional of the deeds of our steeds way back when. Your old Schwinn Varsity, from back in the day, goes here. Repent before Tarckbear! (Maybe this will bring some perspective and humility to tarckbike) Lookit this janky coasterbrake POS! I loved it, right up until it tossed it’s chain and I ate a car. From my bandwagon jumping back in freshman year.

super embarrassing… 8th grade.
wrong size fork and everything. that frame wasn’t make for a 1 1/8th steerer tube either. i still wonder how the hell this all worked out.
700c fork on a frame built for 26in wheels. 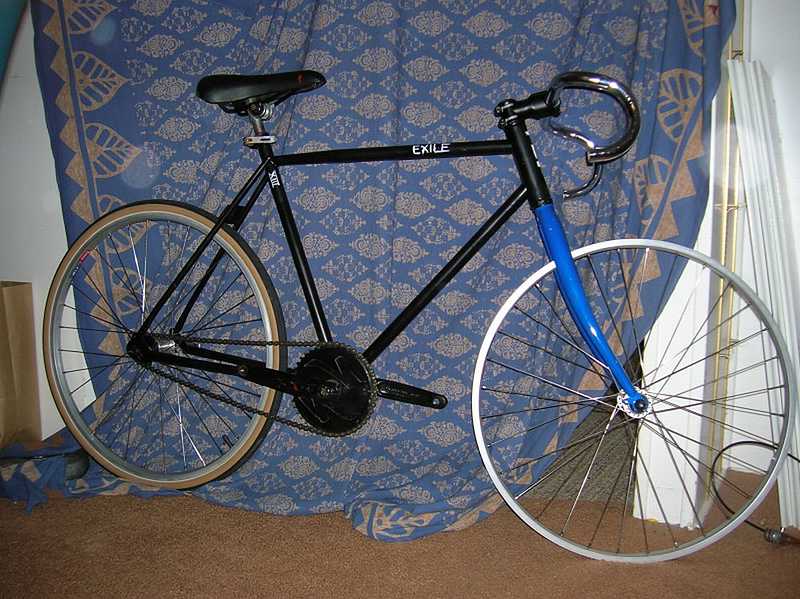 don’t have pics of my second one, but i still have it and it’s no longer a party foul. i edited it

Though I’m not sure it counts since I had the LBS build it. It was quickly wrecked and I used some of the parts to build up this Bianchi, which I consider my first real fixed gear:

I ride this when I’m afraid the tarck bike is gonna get stolen. I’m gonna get fenders and a rack for it though and carry groceries more comfortably on it.

In all of its wretched glory: a gaspipe Volkscycle frame, Sugino track cranks which I foolishly ruined by installing on a JIS bb, bikewheels.com cxp22/formula wheels, GR9’s, centerpull brake with the slots filed down so that I could run a brake on a bike meant for 27’s and fat tires.

It was such a big step up from the Schwinn Varsity that I had been riding that it felt like I was riding a goddamn Pinarello or something. I rode this bike all over Santa Cruz until the headtube lug started to pull away from the downtube. Then I converted a 1984 Miyata, which I still ride, with the parts from the volkscycle. the only parts left on it from the Volkscycle are the front wheel and the clip on fender, I’ve broken or switched out everything else.

Still have the frame.

With Profile bullhorns, Suzue Jr’s to some rims that I don’t even remember anymore, and lots of other lame fixietastic parts. Brakeless, of course. Now that I’m thinking about it, I guess I’ve had this frame for over 7 years. That’s a really long time for me.

I really wish that the previous owner hadn’t flat blacked it, because the original paint was this beautiful metallic silver with a red headtube. If anyone has any ideas how to get rid of an 8 year old spray paint job, that’d be great.

I had a dumpy old Univega singlespeed beforehand, but this was the first party foul that I really put time into.

what is that frame? seat cluster looks like an old trek?

Yeah. Some old 531 Trek that I really enjoy.

Unfortunately, this is the best picture I have of my first partyfoul:

Brakeless suicide hub Miyata conversion with a fancypants rattlecan job. Shit 2 piece cranks, original steel rimmed wheels, old brooks. I thought it was funny to pull the NDS crank and flip it so it was in line with the DS crank and ride it around. I actually still think that’s funny. Got killed by car.

Replaced by this, which was also killed by a car not long ago:

I’m gonna bring it back with a new fork in dedicated polobike form.

My old conversion that got stolen: i think that may be my favorite conversion ever.
cdk’s

i loved the shit out of my world sport, never converted it.

when it was first converted one of the most recent pics before the new frame