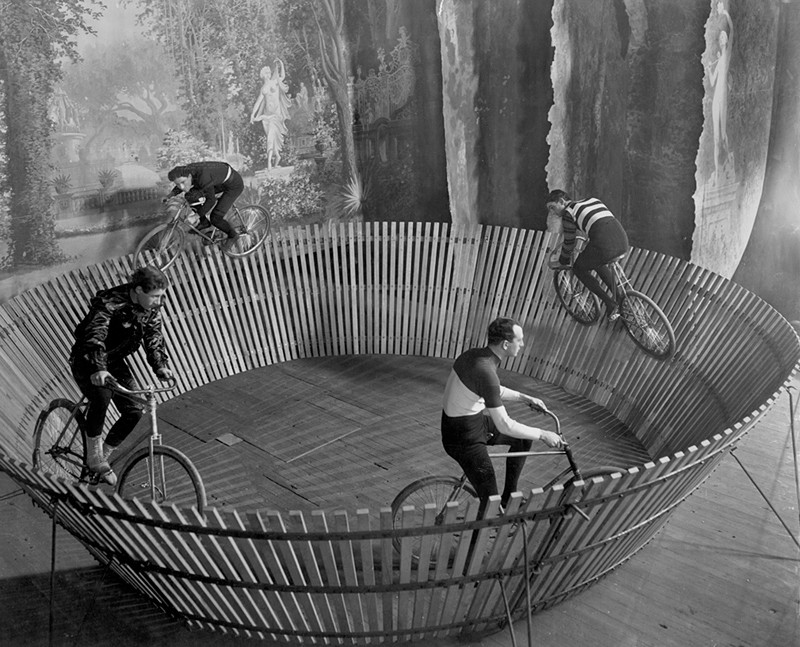 Lets build one and live in it.

some kids built something similar in boston a few years back. it was in some abandoned warehouse. i’ll dig up pics if i’m not lazy.

some kids built something similar in boston a few years back. it was in some abandoned warehouse. i’ll dig up pics if i’m not lazy.

'I rode the boston velodrome that was down at drydock. I don’t remember the actually dimensions but i think the angles were 20deg and 43deg for the ‘straight’ and turns. total length around the track had to be less than 100 meters, probably more like 50 meters. I believe it was built by tim from tufts (all the info i know) and it was based on the track that was supposed to be built where the necco factory is in cambridge. he did a ton of research and if someone was serious about building another one, he should be tracked down.

my only complaint was that it was built with a single sheet of plywood and the joints shared a 2x4. with 2 or 3 people on it screws were popping left and right. if it was built more like a skateramp i think it could be totally bomber.’

i would ride in the stripey velodrome.

that thing’s got nothing on the human powered roller coaster.

[quote=x]that thing’s got nothing on the human powered roller coaster.

http://www.consolati.com/hpr/hpr.html[/quote]
Hell yeah!!
I saw a video on this thing. I’ll try to look it up. Some nasty crashes.

I love the sound bikes make on wooden tracks.

[quote=x]that thing’s got nothing on the human powered roller coaster.

This makes me think: bike races should happen at go-cart parks. That’d be fun

new england velodrome is was mostly a go kart track until this year. it ain’t exciting: shallow banks.

yeah. I keep forgetting what this thread is about.

we should make one.

don’t rembember where, but some guys built a velodrome of sorts with wood pallets as the backing to it. actually not sure if it was a drome, but they used a shit ton of pallets and it was in the shape of a circle.

i want a velo
in my house