Let’s kick this off. Swiped from Score Of The Day

Part of me wants the thermal bibs 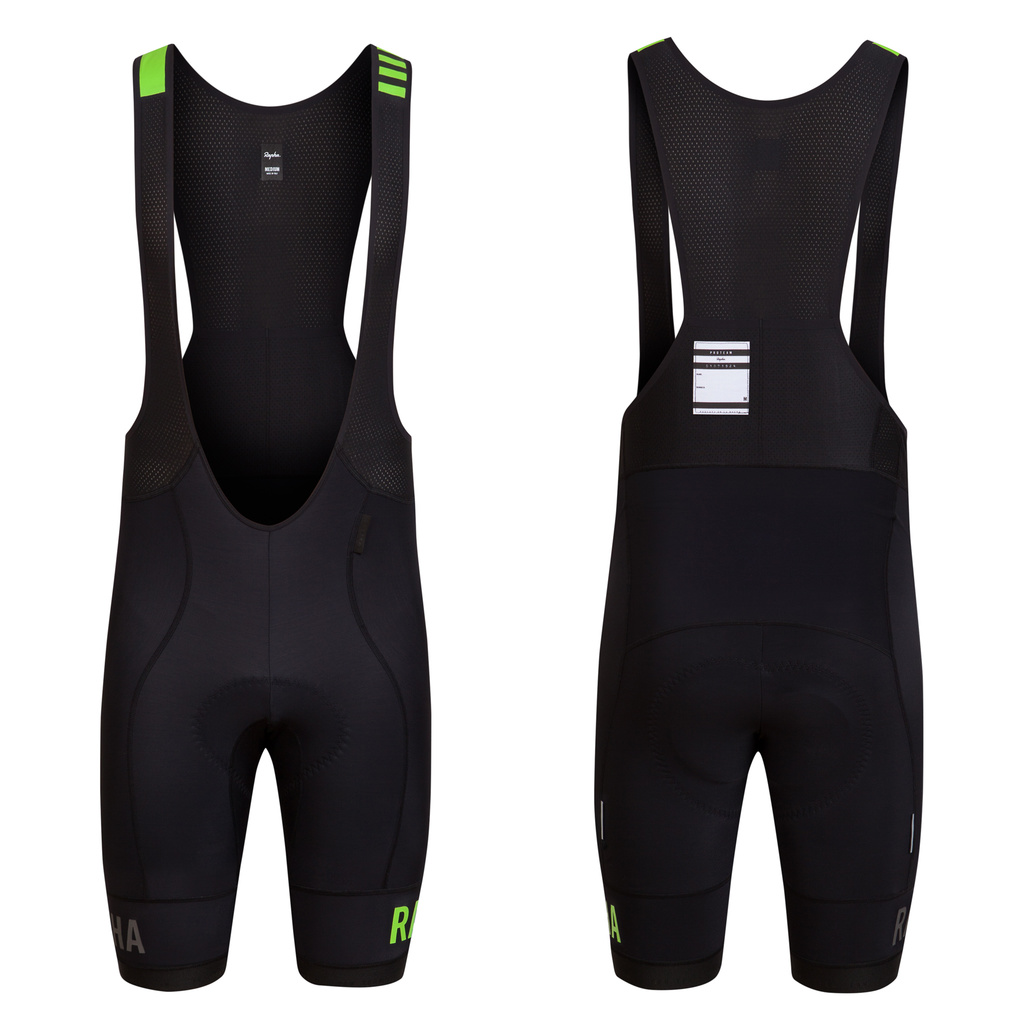 and part of me says slap you live in california. Just because it’s been raining for 2 days doesn’t mean this is a thing you’ll ever use. I should probably get another pair of classics or a pair of the pro teams. I have a pair of small classic bibs and they are the only thing I want to ride anymore, and that includes my assos shorts too. 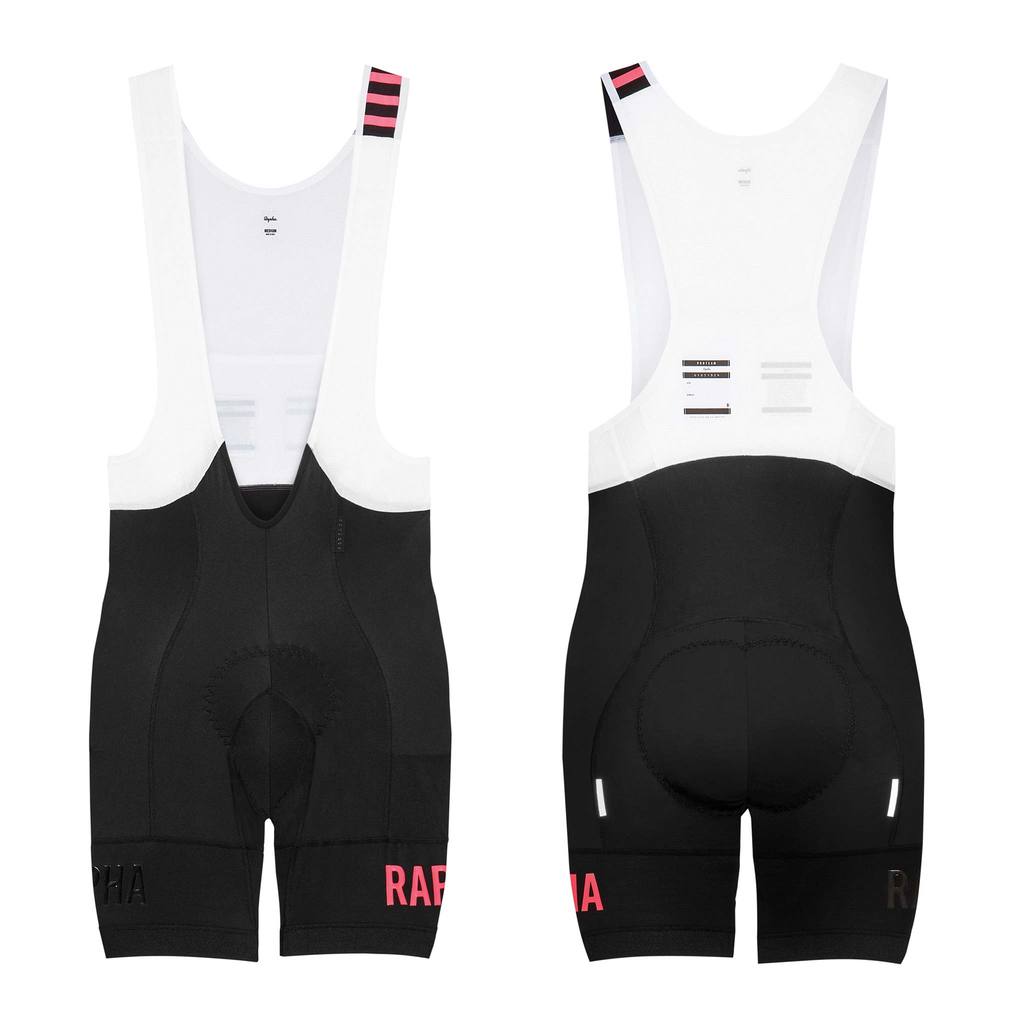 What the fuck is the point of thermal bib shorts?[/quote]

for cold weather?
i’m not a huge fan of long tights. Weather changes so much on one ride here I’d rather have a warm core and keep knees uncovered. I usually just suffer from frozen peen when it actually gets wet/windy/cold and I still want to ride.

I’ve been there. Sacrificed a merino liner glove to wind block for future generations.

This reminds me. Where’s rando?[/quote][/quote]

One thing to keep in mind about the Rapha thermal bibs is the legs are considerably longer on them than the normal Pro Team bibs (Assos et al have very similar fit across the board). That said as the weather cools I move from the Pro Team to uninsulated Assos bibshorts. The diaper is surprisingly good at keeping genitals comfortable until you start losing the ability to regain core body temperature. Where the thermal bibs come into their own is long hard rides on inclement days and allow you to push on into hardman territory. Nothing silly about wearing them in CA where full bibtights might see one day of use most years.

I prefer to have my knees uncovered or at least as unbound as possible too. If you haven’t tried the Rapha merino knee or leg warmers I suggest trying a pair.

Its getting pretty brutal down here
This morning for my commute i couldnt decide if i wanted to wear my sw8 levis511 stretchy pants or some cutoff shorts. Was kinda cold but that borderline temp. I wore the pants and was kinda warm for it. The ride home is gonna be sweaty.

Madison’s alright
45* when I rode to work at 5:00 so I wore shorts and a nearly see-thru wool top
I wish it would get cold already so I could ride on some lakes
but riding through 500 ft. vis fog feels pretty BA

Bay Area rider, love thermal bibs. Warm core = warm extremities and less layering / accessorizing. I really like Giordana’s G Shield model. Obviously, bib fit and comfort are largely down to body type and riding environment, but of the five or so insulated bibs I’ve tried, they are easily the best.
They feel a bit warm on long climbs in direct sunlight, but on damp, cloudy days with routes that pass through some of the permanently shady valleys in the East Bay hills, they are great.

Situation is about the same here. After a few weeks of pretty cold weather, it’s been like a wet fall here the last couple days. Actually did 30 miles on my road bike yesterday wearing shorts!

Pretty impressed this year with the Levi’s Commuter jeans. I’d been wearing some thermal tights under them whenever it was below freezing, but now I’ve found I only really need the thermals when it gets into the low 20s.

My big problem with riding/commuting this year has been the wind. What a fucking drag. At least I haven’t had to ride studs in a couple weeks (though they may need to go back on if it doesn’t dry out here before it freezes again)

Felt good riding the carbon bike in shorts and a light jacket this weekend. Feels better having decided to take it easier this Winter on days like today where it rained all day and is going from 50 to 10 in the course of a few hours while precipitating. Even happier I don’t have to drive in that shit.

Fully into winter in NY. My night time commutes home are hovering in the 32-38 range. There’s like maybe a 3 week period where thermal bibs make sense here. The windstop bib tights have been in heavy rotation for about a month now. I’ve been truly surprised by how warm the Giro Ambient gloves have been. They’re not bulky at all, maybe it’s the quilty type of liner they use with a separate lofty wind stop membrane, but they’ve been pretty on point for those hanging around freezing rides.

This was a few weeks ago on the way back from my second Thanksgiving bike camping trip, with the end of the singletrack behind me and a mountain pass still to go, at around T+115 hours on my Point83 10th anniversary ride

Jan wanted the hand gesture for his japanese bros

the front wheel slipped out from under me as i rode over some rutted ice/snow on the bike path where a tiny bit was shaded by a bridge overpass. didn’t crash but FEELS SCARY MAN. 23c tire prolly doesn’t help either. should put the 32c pasella back on there.

Fred that bag looks pretty awesome. Had it long enough for opinionating yet? 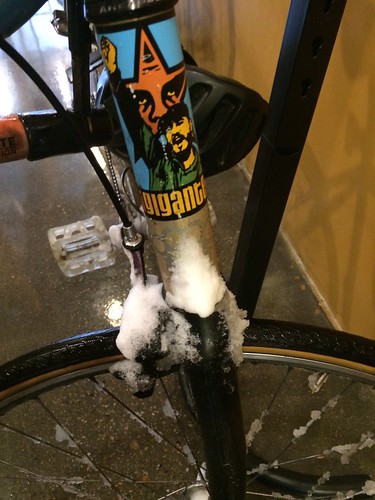 Rich dudes went out and bought Fatbikes, then found out riding them is a lot of work.
I sw8 fixayed the East/West routes and walked the north/south ice tracks since no one in Boise owns a shovel. Now it’s in the 40s and grey again.

we had like a week of winter, then winter kind of went away and it was in the 60s for a while

yesterday’s snow was total BS
just enough to ruin the trails for another few weeks.

Fred that bag looks pretty awesome. Had it long enough for opinionating yet?

Got me thinking about heavy snow days in Boise and Jesus I’m old. Last one I remember was winter of 97-98. High school let out at lunch Because of it and if you didn’t have a truck, getting home was in question. Bogus Basin closed the following day because they were too buried to operate the lifts. Fortunately, I went straight from school that same day.

That reminds me of all the shit I had packed in my blazer for spontaneous woodsing. All the camping gear in the summer, ski gear in the winter. Growing up in Idaho had its perks.

Grenoble has yet to dip below 5° C. Pretty rad for a ski town, atmo.

[quote=lukasz]Fred that bag looks pretty awesome. Had it long enough for opinionating yet?

Is it just their rando bag with some extra stuff on it?

I gotta start thinking about a bag for the elephant soon.

I’ve been doing the opposite of what I’ve done in the past. riding at night and weekends but not commuting (working from home and driving). need to cut that shit out. got these and they are the bee’s knees

got these and they are the bee’s knees

Those do look sw8. I kinda give up on the road bike during the winter, but I was frustrated on Sunday when we were riding in the 40s, and I had those little shoe bras on, and I still couldn’t feel my toes by the end.

Also trying really hard not to go nuts buying gear for winter cycling right now since we are probably moving to Texas next year. Only thing I’d really want are those new 45Nrth gloves that look pretty cool, but my $15 gloves and $15 pogies will get me through this winter just fine.

[quote=JUGE FREDD][quote=lukasz]Fred that bag looks pretty awesome. Had it long enough for opinionating yet?

Is it just their rando bag with some extra stuff on it?

I gotta start thinking about a bag for the elephant soon.[/quote]

no no no. It is made of lightweight technical fabric for starters:

you’re going to have more than one bag.

no no no. It is made of lightweight technical fabric for starters:

Spoiler: Most of the swift bags will soon have an optional upgrade to the lightweight technical fabric.
Probably going to go for the upgrade on the new Ozette for my Rawland Stag