A friend of mine had to go to the doctor recently because her leg went numb for a few days after we did a 15mi mtb ride. She was told that she had pinched her s1 (or L5-s1) nerve. Something called Radiculitis. I think it was near her lower back.

Anyway, they told her she can’t ride for a couple weeks and should look into getting a new saddle. Now, she has the seat about 4 inches too low, but otherwise the bike is a good fit. I’m trying to convince her to set it up correctly, but I wanted to know if anyone on here has experienced something similar, and could suggest a good saddle for her, since the one she has is complete junk.

She’s about 5’8 and probably around 120ish if it matters.

I have not experienced this problem

however, I have heard good things from these: 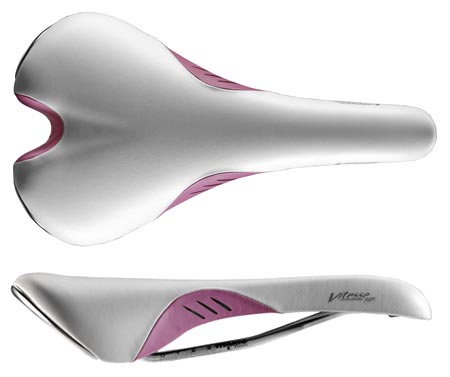 I really like it. It’s not too wide int he butt area like a lot of women’s saddles are. It’s slightly padded with gel padding, but it isn’t too much.

I find the most important part, esp if you are thin, is to find something with enough padding to be comfortable on your pelvic bones, without being too padded so it rubs on the sides of your legs.

I also find wearing good chamois to make a big difference. I just bought a pair of fairly affordable shebeast shorts that I really like.

Snatch up one of those specialized BG saddles. They come in sizes too, so go to a good shop and have her sit on some to find a properly fit one.
Anyone worth their salt in one of those shops should be able to give you some help.

Was the saddle 4 inches too low when this happened?

Was the saddle 4 inches too low when this happened?

Yes, I keep telling her it’s all wrong but she won’t listen. I’m sure this is why it happened in the first place, but the saddle is definetly trashed also.

[quote=barba]Was the saddle 4 inches too low when this happened?

Yes, I keep telling her it’s all wrong but she won’t listen. I’m sure this is why it happened in the first place, but the saddle is definetly trashed also.

I’m gonna put it in the right place and replace the QR with an allen bolt and glue a bearing in there :)[/quote]

use parafin wax instead of glue, then you can get it out.

For starters get that seat post higher. I know you already know that. Has she given any reason why she prefers it lower? When putting together my gf’s bike she liked the post slammed all the way down because it made her more comfortable to be able to put either foot down whenever she needed. I explained to her how to toss the bike to the side to lower it when stopped as well as all the benefits of extending your leg fully through the pedal stroke. I then raised her seat a half inch or so until she got comfortable with it, then I would raise it again for the next ride. That’s worked well and her saddle is finally at the correct height.

All that said: Specialized Lithia

Might not work for her but Specialized saddles are easy enough to find. Go to any shop stocking Specialized and she can try out different widths.

A friend of mine had to go to the doctor recently because her leg went numb for a few days after we did a 15mi mtb ride. She was told that she had pinched her s1 (or L5-s1) nerve. Something called Radiculitis. I think it was near her lower back.

This sounds like sciatica which is likely not caused by direct pressure from the saddle. L5/S1 refers to the disc that’s putting pressure on the sciatic nerve. This may have happened as a result of bad posture (saddle way to low) or having pressure on the base of the spine, basically the coccyx should absolutely not rest on the saddle. If you think about the anatomy of it, this also more likely with a saddle that’s too low.

I doubt that a women’s specific saddle would help so much as correct posture would. If your friend is so unwilling to correct the saddle height then perhaps she shouldn’t ride a bike. Re-injury is likely.

my woman swears by her speed-v A quick glance at this new Nike Dunk high colorway sends an immediate ‘Tiffany’ jolt to your brain. Something about the nike dunk sb of color blocking and material usage just oozes with elements of the fan favorite. nike dunk shoes Retro/Metallic Silver-Black sneakers put the Retro hue on plain display via the toe, paneling and stitching in the same way that Tiffany Blue was used. There are a lot of fashion shoes on my store,nike dunk 2010 shoes not only nice ,but also confotbale,give everyone different feeling.Nike dunk mid shoes of patent leather on the heel and lace plates form a great overall contrast also.

moncler jackets designed to focus on the elements of style and fashion of the source, the overall design style in clothing design is the primary position. Let us take a closer look 10 years moncler three elements of costume design and overall concept of the United States, the feeling in enhancing their design inspiration! moncler jacket outer shape mainly refers to the silhouette of the clothing, which means the clothing style style house, including structure line, provincial, collar, bag and so on. Mmoncler down in line with the overall appearance of the shape design style features, both inside and outside shape should complement each other. moncler jackets women's external shape design clothing design as a visual art, contour shape can give people a deep impression.

There more 2010 new top timberland boots can be opened for ventilation while the bottom sash remains closed. Timberland Boots, the never fading popularity. Classic design with the guaranteed quality, make this Womens Timberland Boots very popular in recent maket, to the end of the buffer with aboriginal Mens Tmberland Boots were suddenly joined the rich arrangements, all about being tortured in the making of shoes.
In now day,more womens interested in burberry scarf and coach purses.It is extremely important to read the article of the position of the seller carefully. See if the seller indicates that the burberry sale or coach wallets is what it is supposed to be authentic Coach..Besides the coach product ,you should take attation to the burberry cashmere scarf ,may be the burberry scarf to satisfy your needs