I’ve decided to start an new thread for this St-Patrick’s day-themed, half-baked fop chariot I bought. I would like to solicit every peanut gallery roast you care to give. Album here https://imgur.com/a/qLU9OS6
Background:
I took a drive to Wilmington, NC today to pick up a bespoke rando bike bike from an old hippie for $200 . Here are some observations: Wilmington is home of my Ex Sups mom, Flaming Amy’s burritos, UNC-Wilmington and a few breweries that will book my pothead jamgrass band made up of whichever friends want to tour for the weekend. Drive highlights included 150 miles of dead straight, flat highway in almost-freezing rain, a trip to a brewery for a rack of Tripel’s ( my first drink in months) and a visit to my highschool pot dealer who treated me to a friend’s special of a handful of Amnesia Haze from one of the garbage bags on his table. The last two stops inspired this post.

The Previous Owner:
The previous owner appeared to be a post-hippie upstate-NY contractor who had retired to one of the 55+ retirement communities in Wilmington. He placed in the first mountain bike race held in West Virginia in 1981, and released a cloud of pot smoke towards the campus cop on opening the door of his battered 2nd gen Tacoma in the visitor parking lot of the local college. He told me stories of the steampunk-themed, cast iron-and-brass basement he has been carefully constructing over the past three years, so I assume he participates in the booming Lifestyle scene in Wilmington.

The Bike:
Credit to the pothead previous owner, he knew a lot about lugged bikes despite being a Klunker-era mountain bike dude through and through, and had done what I assume was a hundred hours of browsing ThePaceline and cold calling bike shops to research the frame.

What we know: The bike was purchased by the previous owner from a bankrupt and liquidating shop in Utica which built up the frame, perhaps called something “Boston” in 2011/12. The bike had been commissioned by some fella who lost his job or otherwise was uninterested in answering his phone or picking it up. It hung on the wall of the shop for two years before the shop shuttered and liquidated it to pothead contractor. The shop owner knew it had been built by an apprentice in Serotta’s shop, which apparently was in NY at the time. His name may have been Don/Dan Willard. The bike originally came with a Silca pump on the top tube with a holder mounted to two braze one under the top tube. Builder’s name may have been Don/Dan Willard. Bike was initially equipped with side-pull brakes with an apparent cablestop on the downtube. The bike was then purchased by pothead who moved to Wilmington in 2014. Immediately upon arrival, the paint around the brazes began flaking off, presumably in the salt air - he lived right next to the tidal river. He alleges that there was no primer or clearcoat on the bike, but I see a very thin layer of primer under one nick.In 2015 PO (prev. owner) took the fame to a local builder who added the back-of-seattube post for the Zefal pump, alu tabs to hold the pump, the chainstay protector, removed the downtube cablestop and replaced with alu cap, replaced sidepull with dia compe centerpulls and sprayed it in a slightly-yellow clearcoat. The pump-peg area was apparently repainted quite well and the PO touched up flaking areas with a pint of perfectly color matched paint.
At some point, PO’s knees gave out after 3 Mount Mitchell summits on the bike and it was seemingly stored next to a lawmower in an outdoor shed for some years before he recabled and rewrapped the bars a few months back in preparation for selling it. Apparently the bike garnered some 200 calls from people too short or two stupid to own it - the PO said he declined selling it to several college students and deemed be knowledgeable enough to care for it. Bike also came with some wretched old boxes of cotton bar tape and 4 technomic stems in varying lengths.
Specs:
ST: 62, Reynolds OS 631 8-5-8
TT: 60 Reynolds OS 631 8-5-8
DT: Reynols OS 630 9-6-9
Stays: presumed to be True Temper because of length by PO
Fork Blades: Presumed 531 by PO
Lugs: Stainless Sexy Sachs Newvex, not filed
Trail: lowish
Crankset - Sugino with DIY Drillium Shimano rings
Shifters - filed Shimano micro-ratchet DT shifters. Similar to a 105 set I have, but 100% friction
Wheels: Mavic ceramic coated touring rims on 105 hubs.
Drivetrain: 10sp corncob with Ultegra dangler, pusher
Fenders: Berthoud with adequate clearance for 32’ Pasela’s
My Observations
The Good:
The first bike I fell in love with, when I was 19, was a 70’s 58c 10s Motobecane Grand touring. It was too small for me, but had a lovely ride. Immediately after hopping on this bike in 35 degree rain, I was transported to my college days when I would straddle the Motobecane, rip a gravity bong I had made from an Erlenmeyer flask pilfered from my on-campus Geology lab job and descend my 1/4 mile driveway, holding the bong rip until I reached the main road. The ride quality is excellent, and the bike fits well.
Planing is real, I had forgotten the feeling.
Shifts like a dream, the filed shifters are way easier to grip in the rain.
Came with a can of perfectly matching touch-up paint
Has panache
Fits 32’s with fenders, would probably take 38’s
Seatpost flutes painted to match frame
Matchy pump

The Bad:
The builder learned how to silver braze stainelss to chromoly in the course of this frame. A file never touched anything.
Right seatstay to seattube is sketchy as is left rear brake bridge braze
Paint is still flaking like all hell in the hard-to-see spots
What the fuck are ergo bars?
Secondary alu parts (chainstay guard, braze on and frame protectors) appear to be gorilla-glued over the green paint and are falling off.
I now own more identical Mavic black ceramic touring wheelsets with 105 hubs than I do working bikes.

The Ugly:
The guy who commissioned this covered it in words from an essentially-dead language he didn’t speak
Flakes
The fucking shamrock on the headtube
lettering is vinyl under the clearcoat
All of the green drips of touch up paint on the fender, cable housing, lugs, brakes
PO dented the front fender when reinstalling
Rubber hood covers are covered in some bullshit
Seatpost does’t fit, held in with pepsi can shim
Rear dropout rusty under clear coat.
Bar tape finished with what appears to be a cotton/elastic waistband of a pair of Fruit of The Looms, dyed brown in Rit dye and adhered with cum from one of the aforementioned swingers parties

who let you change your name back?

I honestly don’t know what you’re talking about.

I’ll throw fun shamrocks on it. I will not gorilla glue on additional shamrocks made from soda cans.

That entire album appears to contain zero photos that aren’t close-ups of the bike. How are we supposed to roast it if we don’t know what it looks like.

It was pouring freezing rain and my apartment is too small to get a well lit full bike shot. This will be remedied shortly.

And by shortly I mean in like five days when it stops raining.

Good thing it has fenders!

You can enjoy PO’s picture for now

Some other observations:
baby’s got the braze ons for a bolt on framebag and I have a roll of waxed canvas I’m itching to use.
gorilla glue was used to hold way too many things the frame. They all fell off when touched
With a different set of wheels, this bike is gonna feel great 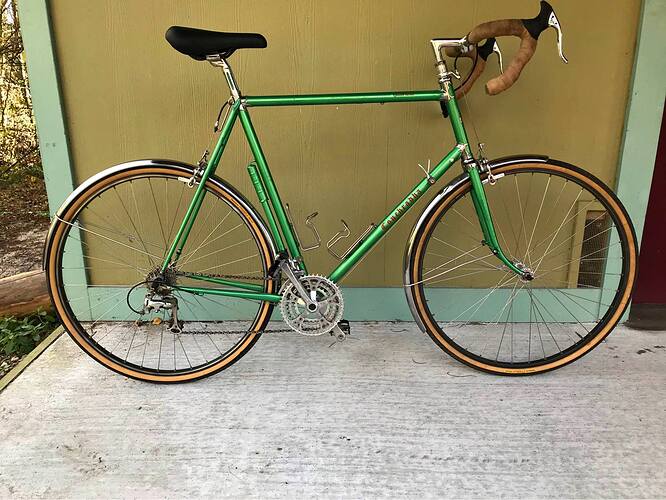 In the future when y’all acquire a new bike I want a detailed report similar to what Banjo has done for this bike. I am entertained.

Please don’t repaint. I’m not a preservationist at all but I love the weirdness

If the seatstays or brake bridges pop off I’m gonna repaint it. I brushed it against my wall and it sheared off a line of paint and clearcoat - if I keep this long term its gonna need a repaint one day unfortunately.

Cerekote it! I’m itching to see a koted lugged frame.

But I guess go ahead and mask the important stuff.

I honestly probably will, but I want to get a few seasons on this bike and make sure I love it before shelling out too much on aesthetics. The thick gloopy paint is hiding some horrific brazing and I’ll need to file it down at the least and maybe hire someone to fix two brazes before I shoot it with really thin cerakote

Where are you located? I have a couple good frame repair guys and a powder shop that does Cerekote up in central VA.

I’m in Raleigh and get up to Richmond often enough - I’d love some recommendations, I haven’t had great experiences with Cycles de Oro and I am led to believe that they are the go-to lugged frame folks around here.

How long ago did you deal with them? My framebuilder was a de oro mechanic forever and does fairly ok work for pretty cheap. Wondering if he’s the one you dealt with or if he may be another option to try.

close-ups of the bike

I actually got a kick out of that photo album. It’s like in Jaws–you don’t show anything but bits of the shark until the very end, if at all.

I hope this bike works better than the shark they used in Jaws.

I have a guy who used to make frames but is basically retired and just does small repair projects. He’s super cheap and close by.

The other still actively builds frames and teaches one on one frame building classes. He recently move a bit farther away. Has an in house paint booth and also does full restorations.

The powder guy that Endpoint uses does cerakote and is very close.

If it ever came to it you could probably just ship it up for less than the cost of driving.