damn, that would make for some interesting riding. my only suggestion would be to make the intersection a jump instead of a bridge.

why would you jump track bikes though

damn, that would make for some interesting riding. my only suggestion would be to make the intersection a jump instead of a bridge.[/quote]

That’s a stupid and dangerous idea. It’s supposed to be for track racing, not tarck racing.

why would you jump track bikes though

I think he was joking about the jump, guys.

It would suck to race on. yo-yoing and no lanes.

EDIT: I saw a better video of this but I can’t find it. If I do I’ll change the linkey.

A smooth transition from track to wall (wall-ride action!)

Is this for boom boom hipster jam?

I think he was joking about the jump, guys.

actually i was thinking it could be a bit more mario-tarck that way, maybe everyone could have lightening bolts and bananas.

actually i was kidding.

The Human Powered Rollercoaster. I was hoping I’d get to try it at CMWC but I don’t think it’s been up and running in the past ten years or so. Too bad.

It would suck to race on. yo-yoing and no lanes.

maybe, but it would be a pretty unique experience.

Hot Wheels is way ahead of you guys 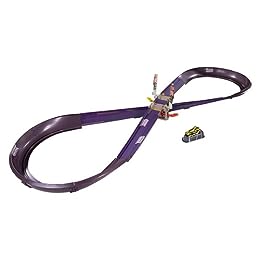 [quote=“queerpunk”]
maybe, but it would be a pretty unique experience.[/quote]

Oh yeah I would definitely ride on it I just think the novelty would wear off pretty fast and leave you with a rather unpleasant race. 45 degree banking is really cool for about 5 minutes than it just becomes normal.

A pack race would be completely unfeasible since the whole race would be braking and accelerating even faster than a crit and the left and right sides of the field would always be moving at different speeds. Something like a match sprint or chariot race would be kinda dull since you can’t just go you have to brake every lap. Which really just leaves something like the hprc race where you just ride hard for 30min or something without much in the way of drafting or tactics. If I’m doing that I’d rather not do it over the same 166m repeatedly. My guess is it will quickly devolve into roller derby on bikes if it ever happens.