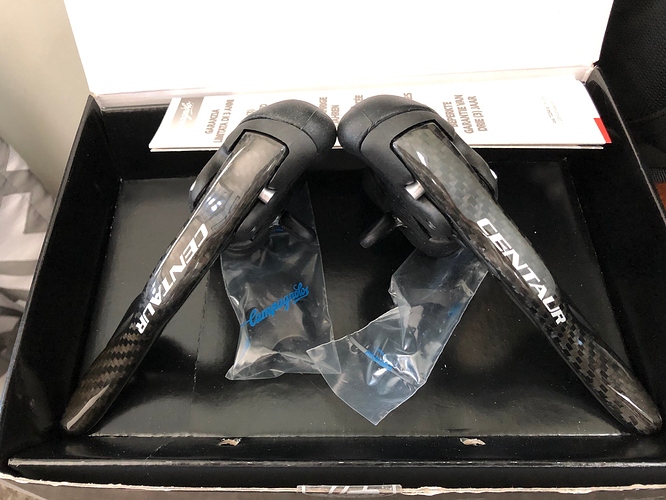 Anyone know are these the kind that will do shimano 9s? I can’t keep my shimergo compatibilities straight

Should probably mention these are dibsed pending payment

Aren’t there also two versions of 10s where only one is shimergo compatible? Or is it 11s?

This version (2011 Ultrashift) has many front shift positions. It was used briefly to shift a CX70 pusher on a triple crank.

There’s original 11sp that does 11v->9s or 11v->10s(hubbub) and a later 11sp that doesn’t. I think it was Chorus and above only as ultrashift had been removed from the lower groups by then.

In 2012 everything below Chorus became Powershift, but cable pull didn’t change. These levers are 2011 models.

I’ve read conflicting info about whether or not the cable pull changed in the “new” 11 spd levers. Most says it changed, but I recall Peter Chisholm (oldpotatoe on paceline, used to work at Vecchio’s in Boulder) saying some things in the past that made me think it really didn’t. Haven’t really payed attention to any of that mess lately.

I never did the hubbub routing. 10v->8s worked a treat with these things and an old XT dangler.

Love that these are the Record of the era but with a different logo and like, without ball bearings or some trivial shite. Used to have several sets!

So did I! This is the last of the three sets of 10 spd levers I bought when they were getting closed out. Bought two sets of 11 spd levers at the same time (still have those, one on a bike, one as spares).