Not a bad looking bike but definitely aimed toward the commuter/hipster/trickster with the risers. Not really what I’d like to see, but definitely a better job with this than Cannondale with the Capo. No component specs yet, but the geometry chart is on GT’s site.

the new capo, for comparison: 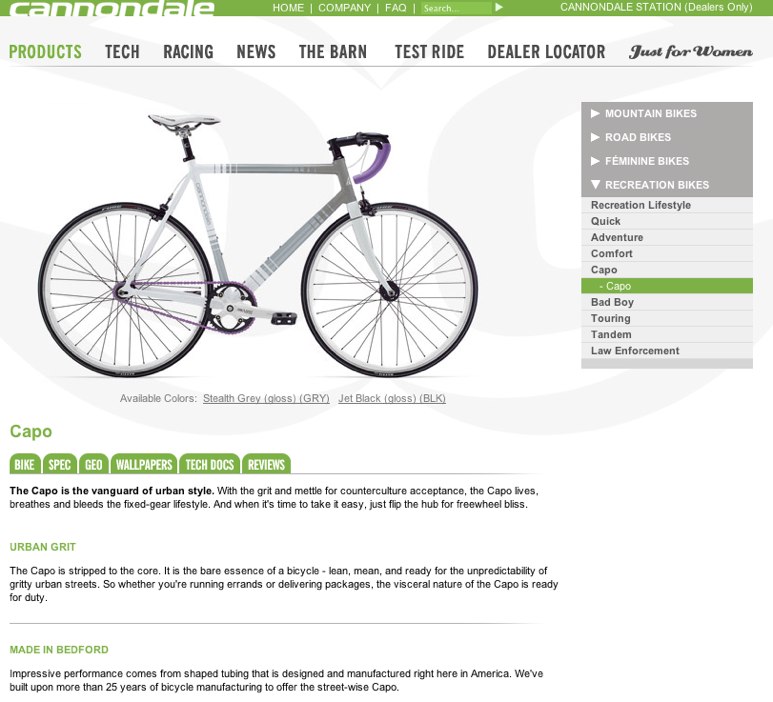 nothing more annoying than that product description. jesus i want the job of the guy who writes that shit. i’ll do it for free as a civil service just so the rest of us don’t have to suffer all the smoke being blown up our asses.

IMO both bikes are pretty meh but the GT is considerably less annoying. i don’t mind the paint on the frame but it’s all the little annoying touches that ruin it - the cranks, chain, bartape. i’d have no problems with it if all the components were just black. more judgements to come when i see a spec sheet and a price.

still not sure what to make of the bar choice on the GT - one one hand, i’d obviously rather see drops stock but on the other the chances are that they’d get swapped for risers half the time anyways. not sure how i feel about the stem either but other than that it seems okay.

I was wondering when they were going to do this. As a GT Pulse owner, I hate it. But that’s for silly reasons of exclusivity. There’s several ways to tell this from an old GT track frame right off the bat, like the tt that does not extend past the st, the braze ons, the fork end inserts. Nonetheless, most riders are going to see mine and be all, nice Gutterball. And if my bike no longer inspires jealousy, what’s the point of riding tarck? Ok guys, I’m gonna go buy a Rivendell. Maybe a Legolas. Cross bikes are cool, now, right?

and that’s the way you do it.

Tarck by definition is ruined to begin with.

This bike sucks. It would be so easy to do it right, but they couldn’t do that.

Anyway, this isn’t surprising. Dorel wants to move GT into the same branch of the business as Cannondale, meaning that GT will actually make worthwhile bikes again. I don’t think it’ll be very successful, but maybe if they borrow some of Cannondale’s technology (BB30, Headshock, Lefty fork), they’d be onto something.

I don’t know I think GT makes some great budget race ready bikes already. They tend to put the $$$ in areas I seem to care about where as to get the same “level” of bike you need to drop a lot more. But then again I just love my Type-CX.

That being said, this Gutterball blows.

Well, I mean that GT is pulling out of the Wal-Mart market entirely, and that Dorel is going to be pushing GT as another high-end brand alongside Cannondale. Like I said, if they’re smart, they’ll make them share technology, because right now Cannondale is far and away the most innovative bike company in racing.

Ya last I heard they wanted to push GT as their “Racing” brand. This is evident in their DH bikes. Serious race bikes that cost no less then $5k+

yeah, i so want to like it, but can’t. even just to play devil’s advocate.

strange because i can’t even really put my finger on what i dislike.

[quote=“snakesakti”]yeah, i so want to like it, but can’t. even just to play devil’s advocate.

strange because i can’t even really put my finger on what i dislike.[/quote]

I can. It’s the stock riser bars, the jank cable routing, the water bottle bosses, the sloping top tube, and the dumpster-level components.

man, bummer. i gotta say, if there was one non-njs frame i could have it would be a gtb/pulse