In the latest issue of Bicycle Quarterly, which just arrived yesterday, they test several new racing bikes (including a Trek Madone) and then explore whether they can find evidence to suggest that improvements in cycling technology have improved racing speeds.

Their conclusion: “There is no evidence that racing bikes have become significantly faster during the last 40 years.”

Their methodology is interesting: they examine actual racing speeds from from the Tour de France over the last 100 years. They also examine speeds from the Milan-San Remo race, which has been run on the same course for 100 years.

Then, as a “control,” they tracked down the best speeds for running the 5k and 10k on track for each year over the last 100 years.

The theory is that the top men’s running speeds will show the trend of how much general athletic performance has improved in the last 100 years, due to improvements in diet, training, specialization of athletes, etc… The hypothesis is that if bike technology has led to faster real-world cycling speeds, the cyclists’ average racing speeds would have improved faster than running speeds.

They examine long-term speed trends during each period of the Tour’s history – looking at whether improvements in road surfaces, frame technology, aerodynamics in TT bikes, etc. have really helped. They also look at a couple of periods when the TdF’s speeds decreased – the 20’s (hypothesis: loss of a generation of racers to WWI) and since 2005 (hypothesis: stricter doping controls).

Conclusion: “There is no evidence that advances in cycling technology since WW II have led to faster racing speeds…this does not preclude that modern bicycles are slightly faster than traditional ones, but the effect clearly is too small to detect…this means that the best recipe for riding faster is training harder and smarter, rather than trying to buy speed with the latest bicycle technology.”

Carbon bikes are stiffer, while still being comfortable. Aero wheels are pretty much pointless for most folks on a road bike and I’d have a hard time believing that time trial times have not improved significantly as a result of aerodynamic improvements. That all said, I wouldn’t expect much different finishing times or results if the TdF was run with everyone on Merckx Corsa Extra, 32 spoke wheels, and DT shifters.

Marketing has a big role in pushing the technology forward even if the results aren’t dramatic. Think about the shift to crabon and compact geometry in the pro peloton. Bike companies were like “You can ride the same biek teh pros ride”. I bet the pros were like “WTF. It comes in 3 sizes.”.

It’s the minor differences that are important. The margin of victory for a grand tour anymore is nothing compared to the ass-on-saddle time. 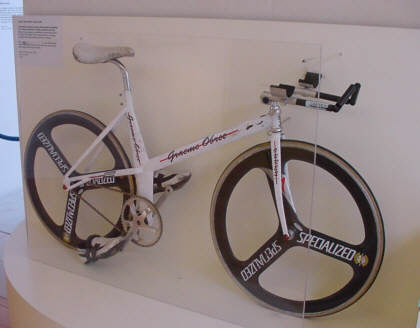 Invented the superman position and is now forced to ride some retro-looking joke bike per UCI rules if he wants to make another attempt at the hour record.

I’d have a hard time believing that time trial times have not improved significantly as a result of aerodynamic improvements.

also for what it’s worth, this is by jan heine.

tarck in general seems to hold a nice middle ground between retro-grouch and blindingly following every new innovation.

in my recent experience, i’ve had the chance to ride an otherwise identical bike before and after swapping a 36h/3x/7spd freewheel wheelset for a 16/20h with 8spd cassette one. not sure about grams saved, but it feels a hell of a lot better, especially on climbs.

in addition, there are several problems with the methodology. i don’t know about milan san remo, but pro tour riding does not lend itself to all-out efforts which would actually demonstrate the current state of athletic training and whatnot.

track and field 5k and 10k – what they used as a “control” – of course generally works the same way. most races come down to the last 600-1000meters. but, they were not looking at, say, the world championship races in these events, but rather the fastest event of the year. at some point during each track season, there was probably an attempt at a world record (and if not that, at least a national record, meet record, etc)

and to say that distance running times over the 100 years simply reflect general changes in sports science is, well, wrong. look at who is winning 5k and 10k events – kenyans and ethiopians, who had next to no presence in the sport prior to kip keino.

if BQ looked instead at how the “western” world (which still dominates cycling) has progressed in track and cycling over the last century, i expect they’d find drastically different results.

He broke the bike he built to conform to uci rules and has no current plans to rebuild it last I read.

also, it seems like UCI rules poo-poo any innovation that would make for technologically improved times

The flaw in this story is that the UCI has spent every second since WWII making sure that bikes don’t get significantly faster as a result of technological advances. It is pretty obvious just by looking at Hour Record and Best Human Effort times. BHE broke 50kph in '84 while the UCI regulated Hour has yet to do so. Technology DOES make bikes faster. It makes the greatest difference on uniform surfaces under controlled circumstances. On the road, TT’s are obviously affected most, but with the challenges of racing on roads with technical corners and changing surfaces, there is only so fast that you can go before you increase the probability of crashing. In the peloton, speed is determined by tactics more than anything else.

Hence, bikes can be made faster but rules, roads and tactics have prevented average speeds from increasing in a significant way.

Jan Heine needs to learn how to design a study before I’ll take him seriously. I don’t have any real doubt that his conclusion here is accurate but I’ve never read anything from him that wasn’t incredibly methodologically suspect. For example, I’m going to say that the top men’s running speeds will show the trend of how much likelier Africans are to be allowed into international competitions over the last 100 years as much as anything else. It’s not that you can’t account for variables like this, it’s just that Heine… doesn’t, and then issues these grand pronouncements that aren’t actually backed by his data.

didn’t Eddy say something to the effect of “I was beaten by technology, not by the man.” when Moser beat his hour record after having never beaten him on a similar bike in road time-trials?

Easy way to do it (according to me): take Chris Hoy and make him do a flying 200 on his current bike. Then a day/two later make him do it on a track bike from the 60s using all period-correct parts. The control is that we lnow athaletes are faster. If he’s as fast on the old bike as his personal bike, then question solved. If he’s faster… well, you’re fucked and we’re all spending way too much on bikes.

you’re fucked and we’re all spending way too much on bikes.