No, not baby foxes. Stretchy pants.

I was just telling @OUTSTANDING_FLAGS_HOME_DECOR that this PI jersey is my current favorite:

In fact, all the PI stuff I’ve gotten in the past year through the discount on EV has been surprisingly good. I really like the PRO bibs, which are worlds better than a set I got maybe 8 years ago that were laughably bad at the time. Clearly the old ones had never been tested by an actual cyclist.

More recent ones, the quality of the fabric is good and the laser cut raw edges feel great.

I have some of those and do like them, especially for the price. I’m thinking of the thermal knickers. Unfortunately, I shrunk and they became too baggy. Replaced them with some Assos Mille GT thermal knickers as that was all I could find in stock this time of year. They’re definitely not worth more than twice the price of The Black Bibs ones.

I also have The Black Bibs regular bibs and the ultimate bibs. Both are great for the price. Have a few jerseys as well. The basic ones are okay but a bit loose for my taste.

I ride in the mornings when it’s cool and hate arm warmers, mostly because I do not have cyclist’s biceps. All my cold weather gear is too warm for 50-60f and I have one really baggy thermal jersey from The Black Bibs that’s a couple years old so I bought this: 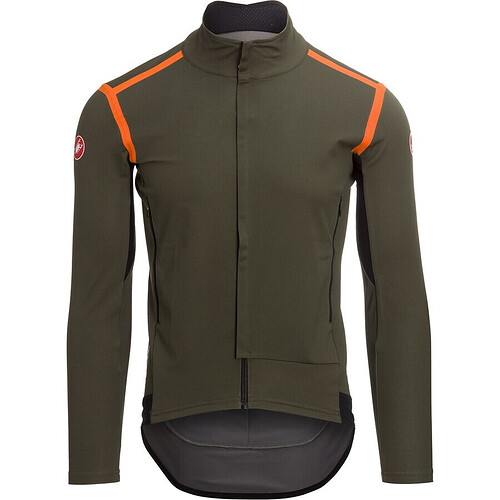 Never been much of a fan of Castelli, but apparently they have a few pieces of kit that are well regarded. This is the Perfetto ROS Long Sleeve Jersey which could maybe also be considered a very light jacket.

The fit is great, it’s very snug, the material blocks the wind reasonably well, supposedly sheds water well, and I don’t really get overheated in it until around 65f. I wear a mesh base layer under it. I suspect it’d be good down into the mid 40s with a thermal base layer.

This particular garment, like many things is cut for salad arms, so that’s a bit of an issue, but that just makes it take a little more effort getting it on and off.

Arm size is a constant battle, appreciate your dithering

ordered a core lightweight jersey because it’s hot out

I have a lot of opinions on kit. Q36.5 bibs and jerseys were my gold standard for a long time, as I loved their material choices. Rapha Pro Team is really nice, but my favorite bibs I’ve ever worn are the 7Mesh Mk3 Cargo Bibs. I like them enough that I’ve sold almost every other bib short I own and replaced them with those.

For less moneys I like Giordana Fusion bib shorts. The chamois is what they had in their top-level stuff like ten years ago and the materials are about just right in compression.

If anyone is interested, OP is working on a line of solid colorway stuff. Bibs and cargo bibs are almost ready. The price will be very reasonable and I’m really happy with the construction and chamois. Still finalizing pricing, but it will all fall in the $100-150 range. Using powerbands, cold black or compression lycra and everything is pre-dyed rather than sublimated.

Hopefully, in a couple of months, we’ll be adding a women’s cargo bib and turning our attention to some cooler weather stuff.

We found a factory that has been really great to work with thus far and all the samples have been made to our specific spec requests, so I’m pretty optimistic.

what’s your price/quality competitor target? would try something if it’s between black bibs and rapha core

That’s the bullseye right there. Everything should be between $100 and $150 and the “cheap” one is definitely better than the “cheap” Rapha bibs I was gifted in 2015 (I assume they are better now based on what the website says). We’re doing the same laser cut silicone backed powerband on all three. Base has a bit less compression, less complicated upper, and cheaper (but nice) pad. Cargo and premium gets a more expensive pad which has held up really well to 6 months of testing and some stupid things like 100 mile mixed surface mtb “alley cat” rides. Upper on the premium is very fancy/feels great. Cargo bibs use the same chamois with a bit different overall construction. The pocket placement seems perfect to me and doesn’t bunch up at all or act weird the way some I have seen. All three have a few reflective hits as well.

The fall jersey we’re trying to sort out is really stretchy so is pretty form fitting and works well under a rain shell or vest. We’re reworking the fabric now after we found the first sample could not be done pre-dyed. Will know soon as a new sample is in production along with a summer jersey, merino blend short sleeve, and vests.

Bibs should be ready to launch in 2-3 weeks.

I’ve sold almost every other bib short I own

… $100-150 range. Using powerbands, cold black or compression lycra and everything is pre-dyed rather than sublimated.Hopefully, in a couple of months, we’ll be adding a women’s cargo bib and turning our attention to some cooler weather stuff.We found a factory that has been really great to work with thus far and all the samples have been made to our specific spec requests, so I’m pretty optimistic.

Braden what pads are you using? Please say Cytech. The ones in Rapha and old Assos pre cuckoo palace or whatever