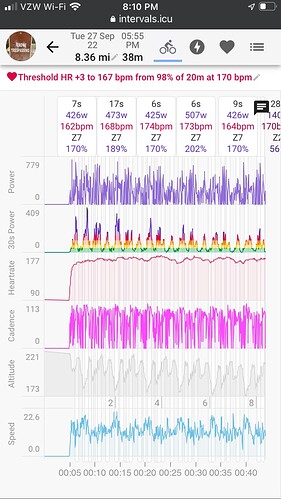 I’m weighing a reverse periodization plan for '23. I’m not sure if I’m going to compete next season, which would make it a good time to fuck around and find out.

We’re looking at another La Nina weather cycle this winter. Less volume would make the outdoor riding a little more tolerable. Also, the build plan I use gets to be pretty exhausting by the end. Evening the training stress out might keep me out of the overtraining band.

I downgraded my smart rollers to dumb rollers. The resistance unit was floating by +/- 20W, which was getting annoying. When I took it off, I noticed one of the mounting posts had broken, which may explain the wandering setpoint.

Did a field test to see if 3.5 days of poopbarning had an effect on my FTP. Seems like it did. Says 13 watts more, but my last FTP was supposedly 243. A bit tricky as I had a downhill between 25 and 30 mins which cost me.
EDIT: This season is bogus. That was actually 2008. That shows you how much you could expect your power to decline over 14 years. I just did a bulk load into Intervals.icu one day. 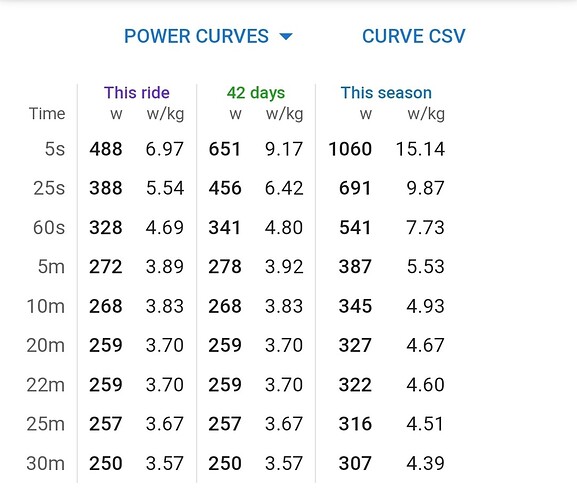 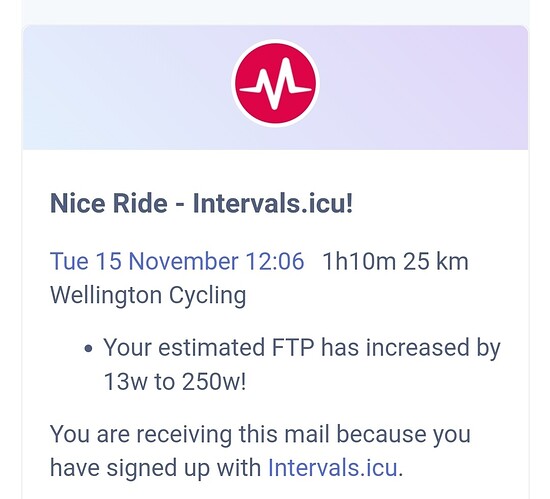 wasn’t this ride like a week ago? my last ftp test when i was strong was a week after a big tough race and i was stronger than before but people told me it wasn’t representative due to me still recovering from the hard race

Yeah. Exactly a week ago. Maybe I will do another one next week, or not. I am mostly over that stuff. It’s not like I have anything to put fitness towards. Just nerding out for the sake of it : P

Do I want this to pretend I’ll get faster outdoors?

i’ve got Shimano non-series 500 cranks on it now, so wouldn’t be that far off. 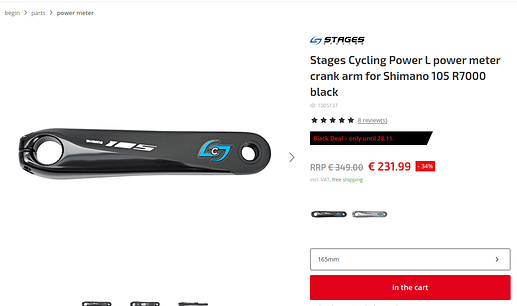 i would say yes if :

I found power super useful for sticking to zone2 which is good for training (even if you aren’t doing more aggro intervals) and also for pacing brevets. It’s way faster to be the nerd who doesn’t chase the group up a 400 watt uphill sprint early in the ride, and then later on have all this gas. Power is infinitely better than PE and quite a lot better than HR for keeping you off that kind of stupid effort.

Tldr I would say that if you use this at all you’re going to be faster outdoors.

Thanks for the replies @amy and @Matty_Matheson

This would def be for the bike I would plan on any long and/or structured rides, so think it fits in that way. I do have a Kickr as well for indoor if I can ever get back to structured indoor training, but that isn’t set up currently as no good place to leave it around babby.

The more common usage I was hoping for is in line with what @Matty_Matheson suggested - better pacing and evaluating long efforts.

yeah i’d listen to matty. he appears to be a stupidly fast slow rider

I want to ride bikes with you and your club someday