Say it ain't so: The Assploded Bike Parts Picture Thread.

That Shimano crank has a claimed weight in line with current Sram red cranks. But ten years ago.

There is no thin oxide layer when they glue the halves together. Clean up, glue right away. Then the glued surface is not exposed to air (just like the interior of a block of Al) so it doesn’t corrode.
I don’t even get your first question.

so they glue it in an inert environment?

first question could be rephrased as:
what happens if an area on the edge of the glued joint gets corroded- like if exposed to salty winter road slush (esp if already scratched through the surface finish treatment). Could that compromise the bond?

Yeah that’s what I’m saying. Same thing with painting steel. Sand blast, then paint before rust has a chance to form. It doesn’t need to be done within 1.5 seconds in an argon-filled chamber 5000+ft above sea level under a full moon, it just has to be done in reasonable time. I assume working with Al is similar. I don’t actually know, it just seems like a safe assumption.

i’m not saying it has to be that crazy, but i think it oxidizes very rapidly, i just can’t find any scienticious figures on how fast.
i know steel goes way slower and i read that one of the reasons brazing/soldering aluminum is so tough is that not much can act as a flux and keep it clean for long enough, but with welding you kind of blast through that oxide layer

There are some specific processes already established for bonding aluminum, at least in the industries I’m familiar with (aerospace). Shimano seems smart enough to figure that part out for their use. But, bonding is ALL ABOUT SURFACE PREP. Fuck that up and your bond will be crap.

In a previous profession, part of my duties were performing qualification testing on incoming materials like carbon fiber prepreg, film adhesive, liquid adhesive, etc. For the film and liquid adhesives, the material was checked with a single lap shear test, so two properly prepared aluminum sheets bonded together with the film adhesive with a 0.5" overlap between the sheets. Test specimens looked like this: 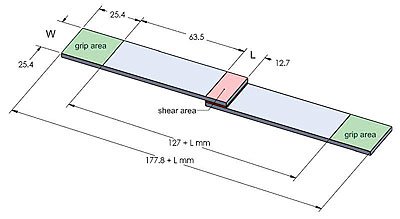 There were specific prep requirements we had to follow. Sandblast the bondline area or use a chemical etching agent, clean with DI water and/or specific solvents (not just acetone), use only lint free wipes, and then apply a bonding primer on the sheet within a specific amount of time afterward. It seems like we had about an hour after the sandblast/etch to apply the primer, probably to avoid the oxidation issue. After the primer was applied, the aluminum could sit around for quite a while before they were actually used.

After that, apply adhesive, cure, and then break stuff.

Holy shit I never even realized that. Shimano doesn’t make a carbon crank. Honestly what the fuck.

Those look like the carbon Dura Ace cranks I saw being closed out at Colorado Cyclist a number of years ago.

An hour under normal shop conditions is the rule of thumb I’ve heard for aluminium, vs 12 hours for steel. At least as far as non-critical bonding and surface finish adhesion goes.

Shimano’s definitely fucked up on a lot of the new Ultegra cranks, but there’s really nothing fundamentally wrong with a two-piece bonded system such as this.

When you’re doing it worse than Cannondale…

But yeah… after seeing one of the failed Ultegra cranks up close, I’m pretty convinced the adhesive starts to have issues if there is a void and contamination gets inside.

There was visible damage to the interior surface from oxidation.

I actually caught a DA crank last year that was in the early stages of failure. One of the seams at a chainring bolt tab was swelling and coming apart from oxidation.

I said it elsewhere… but I suspect we will see a recall.

Curious what the inside of a R8000 crank looks like. 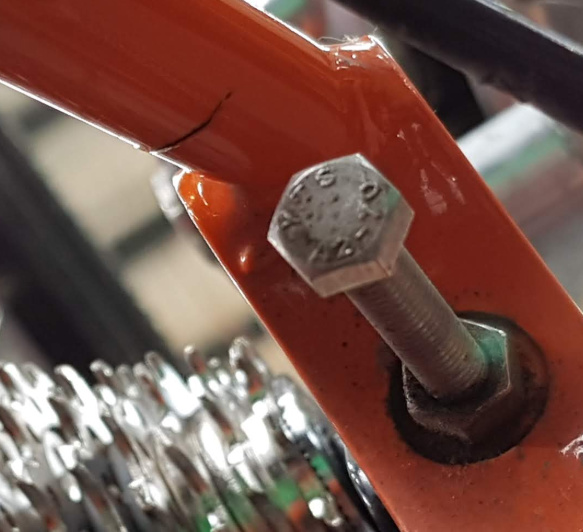 what a surprise, another wolverine cracked in under 2Y

This makes me wonder what voodoo spell rusty put on his.

Does yours have the split on the seatstay or at the dropout like mine?

Neg. Mine has the seatstay break.