I was never into bikes when I was a kid. Actually, I lie. I was really into mountainbiking but the bikes themselves were just not an issue to me. I had an old steel diamondback hardtail non suspension that I would use for dirtjumping with my best friend, David. As I grew older I became a car nut and mechanical things got me all hot and bothered.

2-3 years ago, I sold everything I owned and my now fiance and I moved to Japan. We figured that it would either end our relationship or make it extremely strong (we’re getting married in 6 months after being together for 6 years, so go figure on how that worked for us)

I sold my beloved car, that I spent years working on to become the perfect “mean machine”. 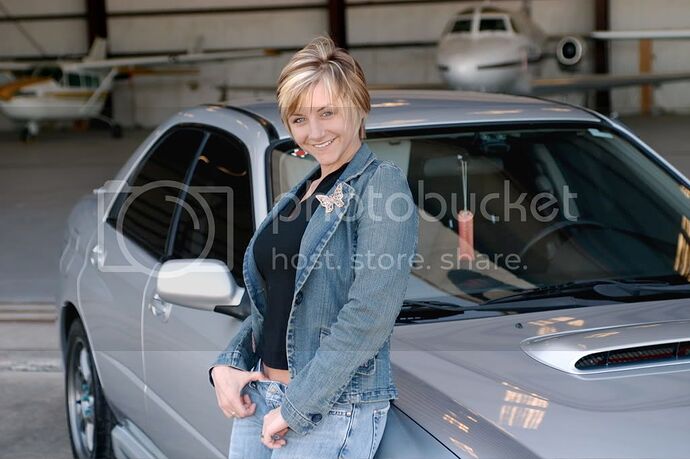 While I was there, I realized how silly cars were. In an urban environment with dense population, the cars were moving along at a snails pace. I lived about 10 minutes walking from work. It was at this point that I bought a cheap POS bike to carry me around. It was a cheap 12000 (100 dollar) folding bike from China.
I loved it. I could visit noodle shops that, previously (I lived in a small town right outside of tokyo) were inaccessible to me. I found all these awesome restaurants and bars and was able to take my friends out to places they’d never even heard of even though they grew up in the town.

I then got my fiance to get a similar model of bike. I had this magazine (in Japanese) that was about bike touring. It showed a picture of a couple taking a romantic bike ride together. I thought it would be a great weekend date…

update on our relationship: She and I were great friends and got along great, however at this point, other than our love for Massive Attack Bjork and Portishead we had little in common that we liked to DO together. I was in love with mechanical things like cars and computers and she was in love with camping and the outdoors. The bike was something that could indulge and engage us both for different reasons.

I picked the first ride I saw that looked easy. I told her it was a few hours of riding. In reality it was 30km, and we were doing it on the Japanese equivalent of Walmart bikes. It was easily one of the best days of both of our lives together. It took us over 4 hours and we caught the train home. 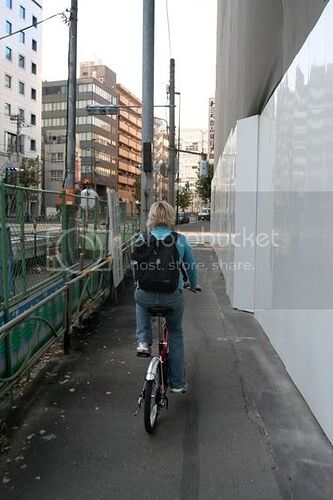 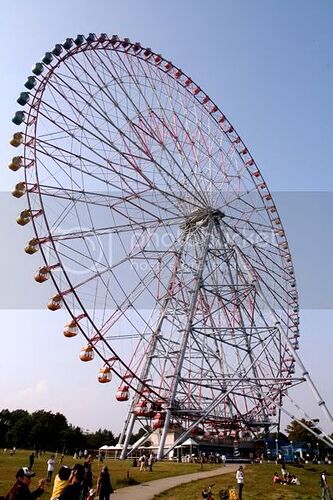 While we were riding, we noticed how we got passed by these beautiful colorful bikes in these guys in skinsuits. They moved like gazelles while we moved along slowly struggling to pass the granny bikes. We could have done the same ride in a few hours…

We saved money for months, and got our first real road bikes: GIANT OCR3.

I found a local forum that had gasp WOMEN WHO BIKED and we latched on to a ride to see the beautiful plum blossoms and included a hot spring trip to the natural fed baths at the very end of the ride. She was hooked and so was I. The people we met were friendly, from all over the world (including Germany, her favorite place and heritage) and finally, a group of people, in a different and difficult country, that we got along with really REALLY well. We were never BIG drinkers, so the typical Japanese pastime left a lot to be desired for us! 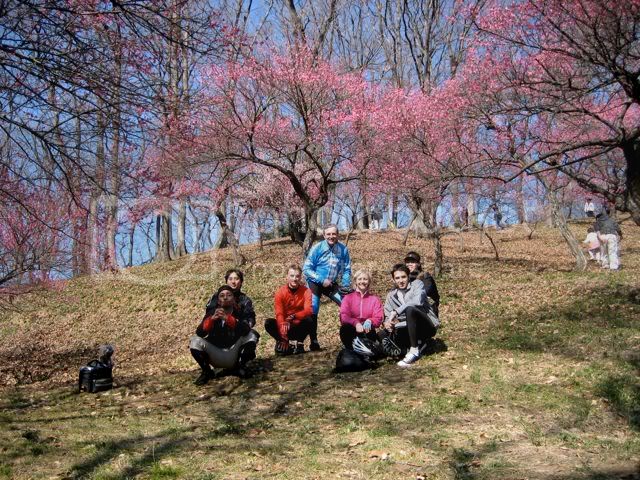 I became bike crazy and befriended the owner of clr-rr the next door shop to what you tarck folks know as M. Makino’s frame shop.

It just so happened that the old 3Rensho frame builder was MY NEIGHBOR and his shop was across the street from the yoshinoya I ate lunch at all the time (I have since given up beef, but remember Yoshinoya in Japan fondly!) I even once paced him on my road bike while he was on his MTB!
There is a shop around the corner that sells old frames that are beat up for very cheap. I picked up this Panasonic Dura Ace tange infinity equipped roadie for 150 bucks after some haggling. The owner of ClrRR laughed that it was a hunk of junk (they only go for pristine stuff. if its even dented it’s junk) but it was light as hell and fast as crap in climbs! 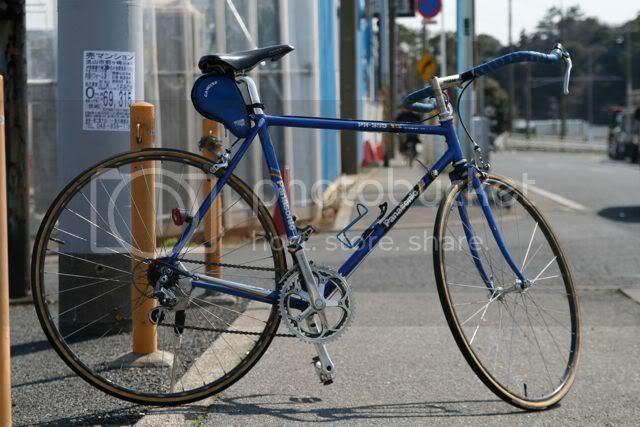 It was at this point I started rethinking my career. I was a teacher. Originally I studied to work in Business as an Economic analyst. I realized that I loved people and interacting with them. I also had a terminally ill student and a physician student. Both of them were two of my favorite people to talk to. I realized that through biking, the most interesting machine that I was using was not the bike itself, but the human body. The graceful movements of a smooth pedal stroke down to the twiddling madness of the keirin riders (keirin track right by my house. I watched on TV though because I worked so much OT) was so interesting and amazing. I had never thought of the human body as the ultimate performance vehicle, but I became obsessed with its beauty. I had to leave Japan to finish my goal: I wanted to understand diseases, like the cancer and neurological degeneration of two of my students, and possibly cure them. I wanted to understand the machinery and beauty of athletes and see how the wear on the body from high performance living could be alleviated.

Shortly before we left, so I could pursue further education, we took a long ride. We rode a century, completely unprepared, all the way around the Tokyo bay from our house in another prefecture. It took an entire day, and by good fortune our club members had a spot for the annual summer festival fireworks show at the very top of one of the tallest buildings in Tokyo. We had the best seats in the entire city, and a security guarded area for our bikes (though theft is uncommon in Japan). It was a beautiful end to my life in a place that changed me forever.

Shortly before I left Japan,
I was ready to go. I sold the giant (it was a cheap bike) but my lovely panasonic was to come with me. I called the airline to confirm. This was at the same time when airlines were changing baggage restrictions. The day before I was to fly out, the airline told me I could not bring my bike with me. Panicked, I sought a company to ship it. Kuroneko said yes, and then no and the other shipping company that took home my car in parts (see the car thread) could not pick it up save for a week later.

With great sadness, I left my panasonic out in my apartments bike parking lot and told my coworker, interested in getting into road cycling its location and lock combination.

I had a club member check on the bike weeks later and it was gone. I can only assume Hiroshi picked it up, however during the voyage my folder with all their emails was lost.

I barely knew you. I thought we would spend a life of cycling together.

here is my remaining memory of the panasonic from when a car jumped out at me: 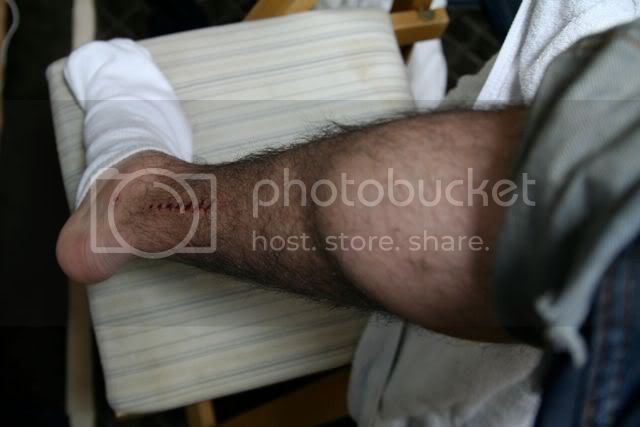 My legs are a lot less hairy these days lol.

Just felt like sharing a personal story with all the other tarckheads.

i didn’t read all of that.

wow, thats a badass story.
I had a similar experience a couple summers ago with a 5 dollar thrift store freespirit, though less epic.

You’ve grown so much, from being a car nut to wanting to help people. I admire that.

btw I remember seeing your Panasonic a long time ago on bikeforums. At the least, it may bring joy to another person’s life again.

so it was worth the read?
CheshireKat is new… so I wasn’t sure

I would say so.

Makes me miss Japan. And the store next to the Makino shop is awesome.

Makes me miss Japan. And the store next to the Makino shop is awesome.

same here and truth (the upstairs is insane).

You’ve grown so much, from being a car nut to wanting to help people. I admire that.

[quote=“ben”]Makes me miss Japan. And the store next to the Makino shop is awesome.

same here and truth (the upstairs is insane).[/quote]
YOU WENT UPSTAIRS???

I remember those pictures. Didn’t know you went with him.

Are you talking about Punch Cycle? Or where?

nah, i think it was called recycle cycle? in chiba… i’m not totally sure. i just call it the 3rensho graveyard.

i hear ya… my gal is finally moving back to the states, which is rad (i’ve been back since march already, wtf), but it makes me worry about getting back to tokyo soon. i was really hoping shit would work out that we would end up there.