dumb question: can I use an Eagle GX AXS shifter with a Rival AXS rear der (guessing so, but curious if anyone has seen this combo in person)

How did this end up?

I have all of the housing and cables now so it’s a matter of hooking up the bb7s and running a derder cable. Steel bars have been swapped for titanium ones.

Orc rack fit with some bending and hoping. What’s the best way to attach a wald to a rack? Zip ties?

Gonna swap the cranks out and can’t decide between dura ace cranks with a 38t narrow wide or white industries Japan cranks with blue stridsland chainring.

If anyone has some weight weenie QR 100/135 mtb dead ender wheels I might be your guy.

What’s the best way to attach a wald to a rack? Zip ties?

Outdoor rated zip ties work. I like using a couple of hose clamps as well.

What’s the best way to attach a wald to a rack? Zip ties?

I use zip ties if the basket stays on the rack. But one bike I switch back and forth between a basket and rando bag. On that bike I use two Coghlan’s straps woven between the rack and basket. Holds about as well as zip ties but I don’t feel bad about throwing them away all the time.

I was about to say that 26" is true deadender, but thinking a bit I’m wondering if there aren’t actually fewer 650b Q/R bikes out there.

I have some 650b dead Enders but definitely not weight weenie.

The Mulo arrived. In awe of the gentlemanliness of this lad. Has a chain holder and a pump peg.

If I keep it, I eventually want to shave off the cable guides and canti posts, which would fortuitously necessitate a respray. 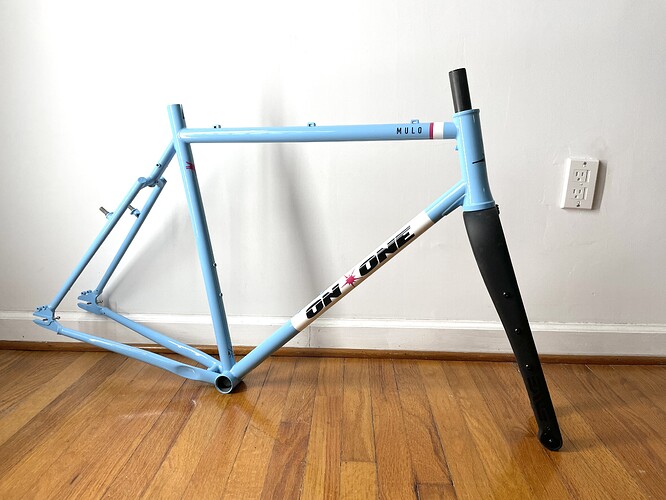 whoah that’s pretty cool. did you get the fork with it?

This is one of the rare times where the dither stars aligned. I had that fork on my previous (sold) endpoint, held on to it imagining I’d probably sell it too, then found an absurd stand in frame.

i sure still haven’t built that frame up.

@earwig how is your ditherer going?

I ordered a bunch of parts from Bike24 and during checkout autofill managed to replace half my old address with my new address. I caught the mistake when I got the shipping notice, but DHL wasn’t able to update the shipping label. It made it to the town where I used to live and I managed to spot the tracking right when it went to “return to sender.” Called up the post office and Sol’s very helpful colleague held the package for a friend to pick up and re-ship to me. I’ve got most of the drivetrain and brake parts, but I can’t finish setting any of that up until I get the handlebars from the Bike24 order.

Rims ordered from LB won’t ship until after Chinese New Year, but I’ve got another wheelset I can throw on to get it rolling.

I’ve learned that IS brake mounts require a bunch of M6 bolts. I have oodles of M5 bolts from the Harris Cyclery closing auction, but apparently only 3 random M6 and the local hardware store doesn’t have stainless metric hardware.

I think I’ll have it rolling by the beginning of February.

you want some m6 bolts? 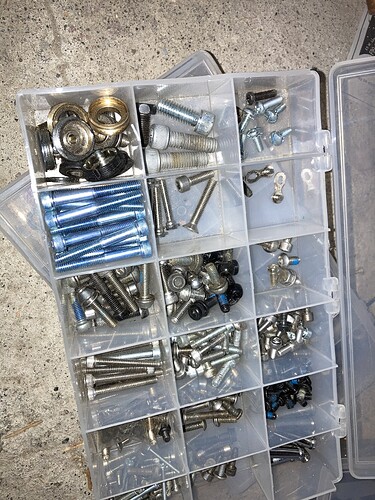 There’s a good hardware store in the next town over. I need to run some errands there anyway.

All the options bother me, I think because fixed gravel is already touched enough without dynamo and 650b in the mix, but also why stop when behind