You're gunna hurt yourself: Carry Shit Olympics (aka the Cargo Bike thread)

chainline is a valid concern, but I am guessing that the noise from the cargo part of the cycletruck would drown it out. I currently have a truck tarp folding enclosure instead of a bucket, which is quieter, but that’s a really low hurdle to clear.

Yeah, and really how often are you going to be in the 46T. For me, it was going up one short steep hill in my neighborhood and that’s it. And yet, I dithered anyway. I just hate hate hate noisy drivetrains.

Something is rubbing on my clyde. It’s driving me nuts. I can’t get it to happen in the stand and it happens independently of pedaling so I’m thinking it’s a tire rubbing somewhere but everything looks like plenty of clearance and I can’t find rub marks anywhere. I’m gonna start by installing a slightly smaller front tire since the one on there is roached anyway. Fuckin bikes are annoying bb

…So what 1x drivetrain is good for a cycletruck?

I’ve not set up a cycletruck, but the 1x on my primary trailer lugger is 11-36 and a 48t chainring (6870 dangler, generic (suntour?) cassette, wolftooth-clone oval chainring, sram fixie crank) which is barely enough to pull 80 pound loads up an 8% grade.

that’s some intense gearing, I think that the setup I have now is like 42x30 for the low gear.
I wouldn’t mind tiny gears for getting started up hills, of which there are many in this, a city bisected by a river.

Is your Lorry still running the stock ring and cassette? If so, that’s a 40T ring and I think an 11-34 cassette.

Had I not a dumb hill to get up or not electrified it, a 36 x 11-36 with that M640 SSW dangler would probably give me enough of it and increase the kickstands options as a bonus.

Oh dang that’s right, smaller chainring clears kickstand better. Geez the stupid problems that we all dither ourselves into…

so a 1x drivetrain with a 24t chainring and a 11-25 would let me choose any kickstand but also force me to average like 120rpm around town. tempting!

Yay! New tire solved the problem! The old tire had a bulge on it from being extremely worn out and I think the bulge was rubbing once per revolution.

Whats the build on it? Not gonna lie, if I was going to spend 3k on a used cargo bike it better have e-assist

yeah I mean that’s your definition of what the bike is worth, and we can agree to disagree, no harm in it in time when NFTs are apparently a real thing people pay for.

the build is $5000 which means nothing to anyone but since you asked it’s a bike that was $3900 new, with the extra Alfine IGH upcharge and Gates belt and side panels and a dynamo. At least you’re not the person in Michigan who says “this is what they’re worth” and sends me a bike that’s listed in California as the example of what I should sell my completely different bike for

Rode the cargoMerckx on my 30km commute yesterday to take a box of curtains back to that office. I did it on the clock instead of getting it trucked. In full kit on that weird bike I got many looks from roadies.

The box does not like wind and the grips are too grippy, but pretty good for. 60km round trip. Took me 20min longer than normal in each direction, about the same as when I commute in the snow.

People wiggle around me at lights more, too. So I had to pass a bunch of hybrids up hills to make a point. I’m slower than me, but still faster than them. 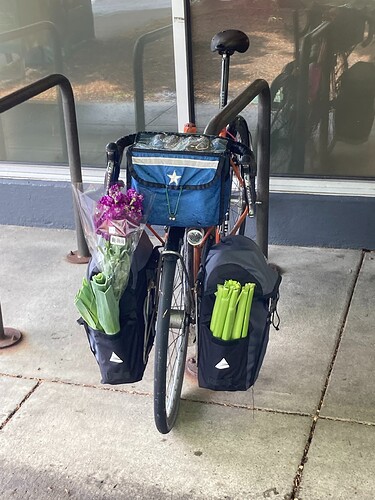 Components for a mother’s day bouquet and red beans & rice.

Is this thing big enough for adults?

I think we concluded “maybe with huge stem and seatpost”

Gotcha, didn’t know if it had been discussed and had seen an ad for it on IG earlier.